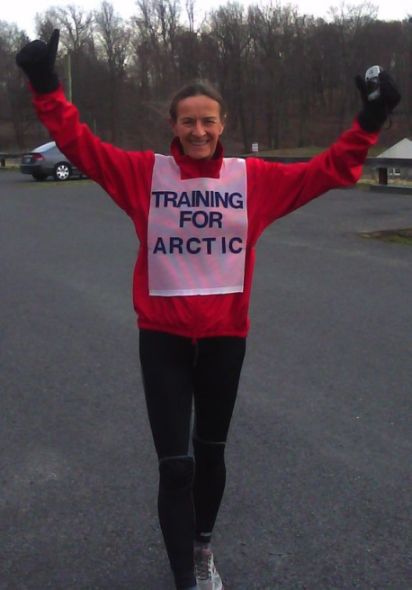 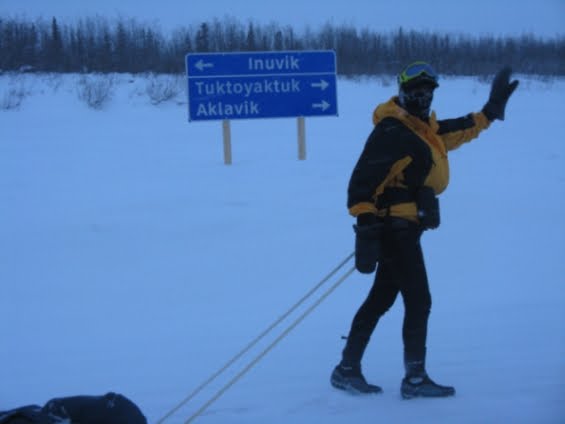 Click here
Posted by Arctic Challenge at 5:54 PM No comments:

Wrap up by Andrew Stuhl

I wanted to send a final email to you all regarding Ali's Arctic Challenge--the 360km Ultramarathon held in Inuvik this past weekend to raise money for the Inuvik Homeless Shelter.  Below you'll find my summary of the weekend's events as well as an update on the money we've raised together (so far!) for the Shelter.  If you have no idea what I'm talking about so far--no worries!  Just read on!

Alicja completed the first leg of her journey--Inuvik to Tuk, a distance of about 187km--in roughly 36.5 hours.   That's nearly four marathons, in a row, without rest.  She did not sleep, but did take stops to eat, change layers, and focus her mind.  While pulling a sled full of her gear, she ran at a pace nearly equivalent to completing a 5k every hour for a day and a half straight.

And then she ran back the way she came.

She did take a day's rest in Tuk--getting some shut-eye, meeting with town residents, touring the settlement on the Arctic coast.  From the beginning of her return journey to its end in downtown Inuvik, Alicja had a support vehicle trailing her.  Several dedicated people ran alongside her, helped dry her clothes, kept her spirits positive, and then stepped back and let Alicja do her thing.  Leaving Tuk at around 12:30 am on early Saturday morning, she reached a point 30km outside of Inuvik by 8:30am on Sunday morning.  Again, she completed this distance—157km in 32 hours--without rest and through intense weather conditions.  On Sunday morning, air temperatures were around -29C with a wind chill dipping below -34C.

Meanwhile, a group of 12 runners gathered in Inuvik at the Recreation Complex, boarded a 15 passenger van, and drove out on the ice road to meet up with Alicja and the support crew.  Earlier in the week, members of the Inuvik Run Club had placed markers every 5km from the 30km mark all the way to the finish in town.  When the van arrived at the 30km mark, the runners eagerly popped out of the vehicle and began running with Alicja.  She stopped for a moment for a round of celebratory hugs.  Then, the last leg of the journey was on:  a baker's dozen of Arctic runners finishing an ultramarathon with extreme endurance athlete, Alicja Barahona.

In this last 30km, we had many incredible experiences.  Cars passing in either direction honked their horns and waved to us, while some slowed down to take in what was surely an odd sight.  The convoy of support vehicles grew to 5 or 6 cars, each taking their turn to drive alongside the pack and blare inspirational tunes (there's nothing like a little Justin Timberlake at mile 220!).  At each 5km marker, we stopped as a group to refuel, stretch, and change layers, making sure to not allow perspiration to freeze (you'd be surprised how much you sweat in -30C).  We did our best to scarf down frozen granola bars and drink our water as it quickly became ice.

The intensity and the energy picked up with less than 10km to go.  A photographers leaned out the back of a truck to snap photos of us as we ran with Alicja—these will be part of stories to be published in Runner's World and Irun magazines.  As the ice road curved around its final bend, revealing Inuvik, we picked up our step and finished with pride.  A short distance from the edge of the ice road was the completion ceremony, held at Inuvik's Canadian Legion.

There, the smiles and laughter poured out from runners and supporters as fast as the bowls of delicious chili prepared by Inuvik residents.  We enjoyed a slideshow of pictures from the weekend as well as a raffle of prizes for nearly every participant.  Many beautiful words were shared by sponsors and  representatives of the charity, the Inuvik Homeless Shelter.

Perhaps the most uplifting note of all, however, was the announcement of the money raised for the Shelter.  As of Sunday at 5pm, Ali's Arctic Challenge had raised $15,000 to address homelessness in the Arctic.  As of Monday morning, that figure was up to $20,000.  We continue to receive donations as the spirit of the event grows and spreads.  Click here to visit the Shelter's page and scroll down to donate!

Please enjoy this note and the attached photos as a small token of my appreciation for your support in this event.  We each have our own challenges in life—though I'm sure not many of us would list running an ultramarathon in the Arctic!  But whatever it is you face individually, you can confront and conquer it.  My challenge this week was to run 15km on the ice road--a distance I've never before accomplished in conditions I hadn't ever dared to face.  I met my goal, and I know you too can rise to meet your (Arctic) challenge.

Some news articles (from Monday, Apr 11) about the event:  Canadian Press and Runners Web

With love and peace-
Andrew
Posted by Arctic Challenge at 1:03 PM No comments:

For the latest news on Alicja's run, click on comments
Posted by Arctic Challenge at 6:04 PM 35 comments: